Research Points to Proven Therapy for Young Children with Autism 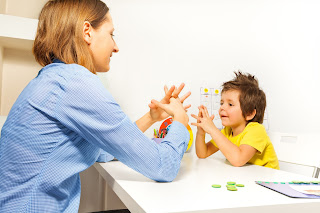 On Oct. 25, while most parents of young children were absorbed with preparing Halloween costumes, and estimating how much candy to purchase for trick-or-treaters, the Lancet Medical Journal published the results of a groundbreaking study by researchers at University of Manchester, King's College London and Newcastle University. The “Preschool Autism Communication Trial” (PACT) which was conducted over six years and included 152 families of children with severe autism, found that what some media outlets have dubbed “super parenting,” helps reduce symptoms of autism in the long-term.  The great news? Anyone can be a “super-parent”, with the right training. Parents who participated in the study watched videos of themselves interacting with their autistic children while communication experts provided coaching on how they could expand communication with their children, some of whom were non-verbal.

According to an article in the Guardian, “The families visited a clinic twice a week for six months, where parents were videoed with their children and a box of toys. Autistic children might not interact with their parents at all, but when eventually a child did offer a toy or made a noise that could be interpreted as a request, the incident was rerun on video and the parent encouraged to respond. If the child offered a toy, the parent reciprocated. If the child said a word, the parent repeated it and added something. The practice was repeated at home every day. The therapy continued with the parents for the next six months with less intensity. “

The researchers observed improvement after the first year of therapy, but the biggest gains were assessed when the children were evaluated six years later.

“At the start of the trial, 50 percent of those in the control group who did not get the therapy and 55 percent of those who did were assessed as severely autistic. The children in the intervention group, though, got better. The proportion assessed as severe in the control group was 63% by the end of six years, compared with 46% in the intervention group,” reported the Guardian.

While the study is heartening for parents, therapists and educators, some have objected to the term “super-parenting” and the implication that those parents, who don’t choose to engage in the practices now being recommended by researchers, are worsening their children’s symptoms.

“To suggest that we “autism parents” need to go above and beyond assumes that we don’t already do that on a daily basis and feels a bit of a kick in the teeth, when really, we could all do with some parenting help to do the best for our children,” writes a Huffington Post contributor, and author of a blog called “It’s a Tink Thing.”

Yet, speech and language therapist, Dr. Catherine Aldred, a member of the PACT research team, denies that PACT enthusiasts are blaming parents and trying to induce guilt. In an interview with the BBC, Aldred says, "We're taking the parent's interaction with the child and taking it to a 'super' level, these children need more than 'good enough', they need something exceptional," she said.

Study researchers stressed that PACT is not a cure for autism. Nevertheless, the findings are a positive step forward.
Posted by Enabling Devices at 9:40 AM