On May 23rd, 2016, William Snyder of Baltimore will celebrate his 13th birthday. Turning 13 is a major milestone for most youngsters, but for William, it is especially meaningful. At the tender age of fifteen months, William, the son of Lori and Ron Snyder and big brother to 9-year-old twins,  Megan and Marissa, was diagnosed with a brain tumor. After enduring multiple hospitalizations, chemotherapy and surgeries, William’s cancer went into remission. Mercifully, he has remained cancer-free the past eleven years.

Today, William loves baseball, roller coasters, swimming and many other pursuits. But the cancer left William with some significant challenges. He is deaf in one ear and hard of hearing in the other, has learning disabilities, developmental delays and periodically, William experiences seizures.

“Once he was old enough to remember the seizures, William developed a fear of sleeping in his own room,” recalls his father, Ron. So, for about two years, William slept on a mattress in his parent’s bedroom. Though William’s fears were completely understandable, Ron and Lori realized they needed to come up with a better solution.

4 Paws seemed like the answer to their prayers. Yet, the Snyders had lots to do before they could bring William’s service dog home to Baltimore.

Read more »
Posted by Enabling Devices at 10:47 AM No comments:

The Play’s the Thing

There’s something about the spring … Everywhere you look, people are smiling, doors are flung open, coats are abandoned, neighbors are chatting and playgrounds are teeming with children.

“The playground is a child’s classroom,” says Shane’s Inspiration, a California-based organization whose mission is “creating social inclusion for children with disabilities through the vehicle of inclusive playgrounds and programs.”

Shane’s Inspiration is one of many organizations to recognize the benefits of inclusive or integrated play, both for children with disabilities and their typically developing peers.

Through playgrounds, say the folks at Shane’s Inspiration, children “learn to negotiate while waiting in line for the slide. They learn to communicate by playing pirates on the bridge. Most importantly—they learn to trust themselves and others by interacting physically, emotionally and socially with their peers.”

Yet, accessing playgrounds that fully meet their needs isn’t a given for children with disabilities.

Read more »
Posted by Enabling Devices at 9:27 AM No comments:

In recognition of National Cerebral Palsy Awareness Month, the team at Enabling Devices salutes our friends and colleagues at Cerebral Palsy of Westchester for the wonderful work they do for children and adults with CP and other disabilities.

Since the founding of Enabling Devices in 1974, CPW has worked hand in hand with us, providing recommendations, feedback and insights that have helped us to create products that enhance the lives of people with disabilities. We can’t thank them enough.

Earlier this month, we checked in with some of the good folks at CPW to ask them why National CP Awareness Month matters and how technology has impacted their work with clients.  Here are some of the thoughts they shared:

Occupational therapist, Tina Weisman could talk forever about the children she treats at Cerebral Palsy of Westchester.
Read more »
Posted by Enabling Devices at 11:54 AM 2 comments:

March is not only the first month of spring, it’s also National Cerebral Palsy Awareness Month. While raising awareness about disabilities and the obstacles facing individuals with disabilities is an ongoing effort, in recent years, advances in technology have gone a long way toward making the obstacles they face, more surmountable.

“Mobile devices have become incredibly popular for their ability to weave modern conveniences such as Internet access and social networking into the fabric of daily life,” writes Larry Greenemeier for Scientific American. “For people with disabilities, however, these devices have the potential to unlock unprecedented new possibilities for communication, navigation and independence.”

With the introduction of Apple’s iPad in 2010, people with all sorts of disabilities could gain access to hundreds of apps by just activating a switch. For those new to switch technology, switches come in a variety of shapes, colors, sizes and types. The choice of which switch to use depends upon users’ abilities as well as how they plan to interact with the technology. Enabling Devices offers switches and switch-related accessories to make iPad use accessible to everyone. Check out these products: 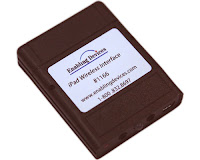 1.     The iPad Wireless Switch Interface (Item # 1166)
To use your own switches with your iPad, you’ll need switch interface. Just plug in the switch of your choice and gain access to hundreds of switch accessible apps on your Bluetooth-equipped iPad or tablet! Our new model features six modes that provide additional functions. To see a demonstration of how to operate the iPad wireless switch device, click here....
Read more »
Posted by Enabling Devices at 1:40 PM No comments:

Start Making Sense: How to Create a Fabulous Sensory Room

“Play is the highest expression of human development in childhood for it alone is the free expression of what is in a child's soul.” ----Friedrich Froebel

In 1837, German pedagogue, Friedrich Froebel opened the Play and Activity Institute in Bad Blankenburg, Germany. Three years later, the name of the school was changed to Kindergarten. The rest is history.

Like Froebel, Enabling Devices founder, Steven E. Kanor, Ph.D. believed passionately in the importance of play for all children regardless of physical, emotional or cognitive differences. Now, Steven’s son, Seth, the company’s new CEO, is continuing his father’s noble mission.

Yet, “the simple pleasures and joys that children experience running, playing and enjoying a sunny day are sometimes not available for children with special needs,” notes the Hidden Angel Foundation. “Due to limitations, they don’t experience or are unable to interact with their surroundings, limiting their sensory experience.”

Sensory rooms provide an antidote to this dilemma by creating opportunities for children [as well as adults] of all abilities to experience the joys and pleasures of freedom, safe exploration, learning and play. 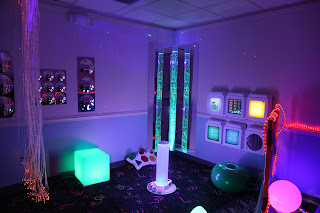 “They offer highly individualized experiences and serve individuals with a variety of disabilities including autism spectrum disorders, developmental disabilities, post traumatic stress disorders, cerebral palsy and sensory processing disorders.” In fact, notes O’Brien, sensory rooms are wonderful for anyone who wants to relax, regardless of abilities. Read More...

Read more »
Posted by Enabling Devices at 11:34 AM No comments: